The destruction of Cerrado, the most biodiverse savannah on the planet, continues at a fast pace in Brazil and rose to 7.9% in 12 months. It lost 8,500 km² of native vegetation, which is more than six times the size of the city of São Paulo’s area.

Even though it includes the period between August 2020 and July 2021, the data were announced with no fuss by the country’s federal agency National Institute for Space Research (Inpe, in Portuguese) on New Year’s Eve, amid celebrations.

The extension of the deforested area is the largest one since 2016. It represents a landmark of the environmental devastation during Bolsonaro’s term, a loyal ally of agribusiness.

According to a study by Mapbiomas, cattle raising and agriculture to exportation were responsible for 99% of Cerrado deforestation. The biome has lost almost half of its original vegetal cover.

Inpe statistics reveal that Bolsonaro’s rise to power stopped the annual decrease of the biome devastation attested between 2004 and 2017. 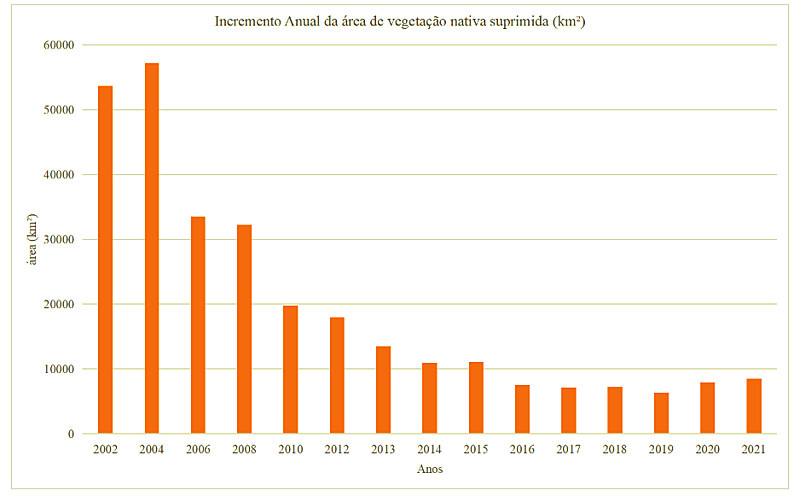 The decrease trend in Cerrado deforestation was interrupted in 2018. / Image: Inpe

At this rate, cotton, corn, and, mainly, soybean will take the place of the 12,000 native plants of Cerrado. Its biodiversity carries the possibility of a sustainable economy with zero devastation, agrarian conflicts, or social inequality.

The observation was made by the geographer and researcher Yuri Salmona, director of Instituto Cerrados. Active since 2011, the institute is one of the NGOs that encourage environmental preservation and the developing of the regional economy, focusing on strengthening the traditional communities.

“We usually think that to import fruits and beverages it’s a beautiful thing, particularly from Italy and France. However, we have difficulty looking at our [flora] richness. We are giving up on our identity for soybean”, reflects Salmona.

Spread on 24% of Brazil’s territory and 11 federal units, Cerrado was devastated most in three of these units: Maranhão (2,200 km²), Tocantins (1,700 km²), and Bahia (925 km²). These three federal units form Matopiba, the combination of the abbreviation of Maranhão, Tocantins, Bahia, and Piauí. Since the 80s, the monoculture plantations have aggressively advanced in Matopiba.

“Brazilwood, sugar cane, gold, oil, soybean, and livestock: there is a deal in Brazil that fits the country in the international market in the same way it was during the

colonization period. The basis of the balance of trade is to export soft commodities and some hard commodities”, says the geographer.

The illusion of development

At this stage, the complicity of the federal government with the environmental criminals is well known. “The question is the general lack of planning, of monitoring capacity, command and control actions, besides the planning and occupation of Cerrado in a smart way", stresses Salmona.

The lack of a national economic policy focused on sustainable development, however, constitutes another decisive factor to the proliferation of monoculture plantations in Cerrado, which are getting more and more destructive.

“The Kandir Law stop charging Value-Added Tax on Sales and Services (ICMS, in Portuguese) of non-manufactured products from farming and cattle raising. In other words, those big exportations are not ‘coming back’ in terms of resources to invest in the country. The structure that allows these same exportations is financed by the federal money”, he criticizes.

From the total amount of BRL 251.2 billion in resources to the Harvest Plan 2021/2022, less than BRL 40 billion were allocated to family farming. In the previous biennium, the index was 19% lower. According to the researcher, the lack of encouragement for the green economy at the national level is also seen at federal and municipal levels. 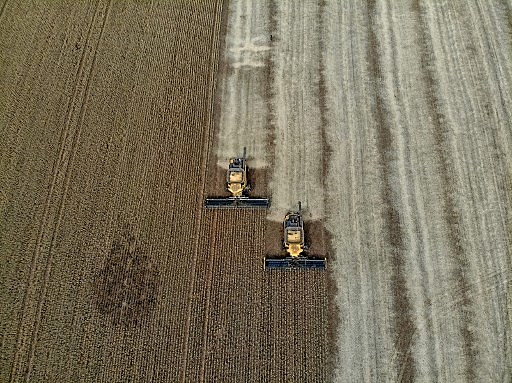 The exportation of commodities as an agricultural mode of production is among the main causes of food insecurity in rural areas / Photo: Sílvio Ávila / AFP

Since the monoculture plantations are not connected to the local development, when the agricultural border “arrives”, the result is unemployment and an increase in income concentration, especially on the hands of those who profit in dollars with exportation.

“The Human Development Index (HDI) can increase momentarily because the population is ‘exported’ to the next agricultural border – there are few jobs and they are for the relatively skilled labors. Therefore, these people will be jobless”, explains Salmona.

The historical series of Inpe in deforestation in the Cerrado began in 2000, but its future is uncertain. According to WWF-Brasil, PRODES Cerrado – a monitoring project conducted by Inpe that generated the data presented here – is threatened by the lack of funds.

"Against a backdrop of a clear tendency for the rise in Cerrado deforestation, the risk of the PRODES Cerrado becoming unfeasible as of January 2022 due to lack of funds is equivalent to a blank letter for environmental criminals", says Mariana Napolitano, Science Manager at WWF-Brazil.

“It is also a new attack on national scientific production and on the supervisory role of the State, which, without up-to-date and reliable data, is less able to implement environmental actions and policies”, she adds.